Saudi Arabia is a key country participating in China’s Belt and Road Initiative(BRI) and major buyer source of the Canton Fair. The Riyadh Chamber of Commerce was founded in 1961 and now has more than 260,000 member companies. It hosts over 1,000 events every year and is the largest, most influential chamber of commerce in Saudi Arabia.

Xu Bing, Spokesperson of the Canton Fair and Deputy Director-General of the China Foreign Trade Centre, commented at the event that in order to play a better role as a platform for comprehensive opening-up and promote mutual, win-win achievements, the Canton Fair Global Cooperative Partnership Program has carried out multi-level, wide-ranging and all-around cooperation with overseas industrial and commercial institutions, providing comprehensive trade services for Chinese and foreign companies to support bilateral economic and trade development. 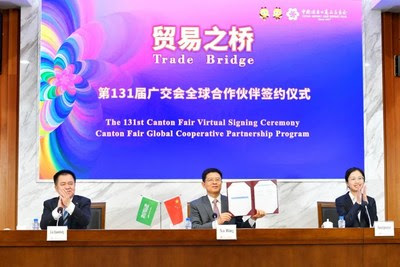 “We’re glad to establish the cooperative partnership with Riyadh Chamber of Commerce and look forward to mutually beneficial cooperation between the two parties that will benefit companies from both countries and empower the development of China-Saudi Arabia economic and trade relations,” said Xu.

China and Saudi Arabia established diplomatic relations in 1990, and bilateral relations have developed steadily with expanded areas of cooperation. The two countries have strengthened exchanges and alliances as part of the Belt and Road Initiative and Saudi Arabia’s “Vision 2030” strategies.

Mr. Naif A. Alrajhi, vice chairman of Riyadh Chamber of Commerce, noted that the signing of the cooperation agreement reflects the significant importance of developing bilateral economic and trade relations between the two countries. The Riyadh International Convention & Exhibition Center is a member of the Riyadh Chamber of Commerce, and it will not only stimulate local economic development, but also promote bilateral trade cooperation.

“It is hoped that in the future, we’ll strengthen resource sharing and channel exchanges to achieve win-win and mutual benefits, and that the bilateral cooperation will become an integral part of the profound connection between Saudi Arabia’s ‘Vision 2030’ and China’s Belt and Road Initiative,” he said.

The 131st Canton Fair will actively expand the international marketing network and sign cooperation agreements with 13 overseas industrial and commercial institutions from 12 countries (including Laos, Kuwait and Albania). The Canton Fair Global Cooperative Partnership Program will have then achieved full coverage among RCEP member countries.

Up to now, the China Foreign Trade Centre has signed cooperation agreements with 157 overseas industrial and commercial institutions from 83 countries and regions worldwide, 67 of which are from the 40 countries participating in the Belt and Road Initiative, accounting for 43 percent of the total number of partners.