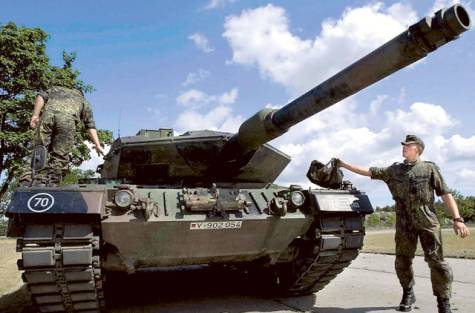 A deal for around 300 tanks was about to be signed, Bild am Sonntag newspaper said in a report sent to Reuters ahead of publication.

The newspaper said that while there was opposition to the deal in Germany’s Chancellery, Foreign Ministry and Defence Ministry, there was support for it within the Economy Ministry.

“The Saudi order could secure the future of German tank-makers Krauss-Maffei Wegman and Rheinmetall, which urgently need new markets because of the restructuring of the German army,” said Bild am Sonntag.

Last year, Germany denied reports that it had agreed to export 270 Leopard tanks to Saudi Arabia. Exports of military equipment cannot be officially acknowledged as they are confidential and disclosure is punishable by a fine or jail. Opposition lawmakers heaped pressure on Chancellor Angela Merkel’s government after reports it had cut a secret deal to sell the tanks, saying it contravened the country’s export guidelines for military hardware.

Arms exports are a sensitive issue in Germany given its Nazi past as well as the role arms makers like Krupp played in feeding 19th and 20th century wars with exports to both sides of conflicts.

Germany has refrained from exporting heavy weapons to Gulf states in the past, given its close relationship with Israel and more recently because of the so-called Arab Spring.

Spanish firm General Dynamic/Santa Barbara would produce the tanks under licence by the German firms, the newspaper said.